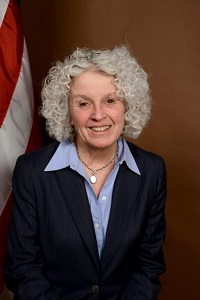 Since her first election in 1992, Edith H. Ajello has served residents of the East Side of Providence. The redistricting process that took effect in 2012 added part of Smith Hill and some of the Water Place Park area to the district. Because the state house is traditionally in district 1, our district number was changed from 3 to 1.

Representative Ajello is a member of the House Committee on Judiciary and previously served as chair of that committee. Her legislation in 2001 added gender identity to RI civil rights law, and in 2012 her bill added gender identity to RI hate crimes law. For years, she co-sponsored legislation to reinstate Ethics Commission authority over the RI General Assembly. This November the question will finally go back before the voters of RI. In 2015, she co-sponsored the successful Comprehensive Community-Police Relationship Act, aimed at reducing racial profiling and warrantless searches of minors. Representative Ajello’s legislation to require law enforcement to get a warrant before tracking our whereabouts through our cell phones, except in emergencies, passed in the 2016 session.

During her tenure as chairwoman of the Judiciary Committee Ajello oversaw and participated in crafting major revisions to the Access to Public Records Act. The revised law requires state and municipal entities to appoint a specific person in each office to be responsive to requests for information, sets clear timelines for the production or refusal to provide the information and clarifies information that shall be treated as public.

In other highlights of the years she chaired the committee, “Super PACs” were required to disclose major donors, possession of a small amount of marijuana was downgraded from a crime to a civil offense and marriage equality became law in RI, following the committee recommendation.

For her legislative efforts regarding civil rights and liberties, Representative Ajello was awarded the Raymond J. Pettine Civil Libertarian of the Year in 2006 by the Rhode Island affiliate of the ACLU.

Ajello served on the board of directors of Lippitt Hill Tutorial and as president of the board of directors of that organization participating in its’ expansion to provide volunteer tutors and mentors in all Providence Public Schools. The organization was renamed Volunteers in Providence Schools (VIPS) and is now known as Inspiring Minds. She serves as an emeritus member of WHEF, the Women’s Health and Education Fund, and is a past board member of 2 to 1, the Coalition to Preserve Choice.

A long time employee of V. George Rustigian Rugs, Ajello is an expert in oriental rug repair and restoration. Over the years she’s been a nurses’ aid in a nursing home during college summer breaks, a caseworker for the NYC Department of Social Services and a tour guide at Slater Mill.

Edith H. Ajello was born in Fanwood, NJ. She attended Scotch Plains Fanwood Public Schools and graduated from Bucknell University with a BA in Psychology. She is the mother of Linell and Aaron Ajello, both graduates of Classical HS.